The true cost of debt

When it comes to debt and savings, many Europeans remain financially fragile, despite the global economy growing strongly. Over a quarter (26%) of households in Europe don’t have any savings at all. And around one in three people with debt will struggle to repay it if interest rates go up.

These are among the findings of the ING International Survey Savings 2018. Now in its seventh year, it questions 15,000 people in 13 European countries, the US and Australia about their money habits.

It found Romanians are the least likely to save, with 36% of people setting aside nothing at all. This is followed by Germany (29% ), Belgium, Poland and the UK (27% each). At the other end of the scale, Luxembourg has the highest number of savers (and the highest GDP per capita of the 15 countries surveyed). Here, only 13% said they had no savings.

It’s recommended people save at least three to six months’ worth of take-home pay to cover unexpected emergencies, such as expensive car or house repairs, without going into debt. In the seven years the survey has been running, there has been little change in the number of households with limited savings.

“Many simply do not have any money left at the end of the month to put aside. There are also those who could save but don’t; they may have fallen victim to present bias – over-valuing immediate rewards at the expense of the long-term,” says Ian Bright, senior economist and managing director of Group Research at ING.

“Low interest rates have also reduced the incentive to save. However, we’re starting to see more central banks increasing interest rates. As these mostly modest rate rises are passed onto consumers, the motivation to save is likely to increase.”

While higher interest rates are good news for savers, they make it more expensive to pay back debt such as personal loans or credit cards. Around 34% of those surveyed said they would struggle to repay their loans if rates go up as predicted.

Pessimism is highest among Romanians (56%), followed by Turkey (48%) and Spain and the US (both 47%). Turkey and the US also have the highest share of credit card debt (51% and 40% respectively), which is usually more expensive than other types of personal debt.

Until now, the European Central Bank has kept interest rates low to encourage people to spend more. But there are signs this is changing. Last year, the Bank of England raised its rates for the first time in a decade. Economists expect the same will happen in Europe in the coming 12 months.

For some young people, it will be the first time they experience a rates hike, and these households may not be prepared for how to manage their finances in an environment where borrowing costs are higher.

ING’s survey also delves into couples’ relationship with money. Three percent of respondents in a relationship said they had kept a money secret from their partner, such as hiding their spending (16%) or their debt (9%). 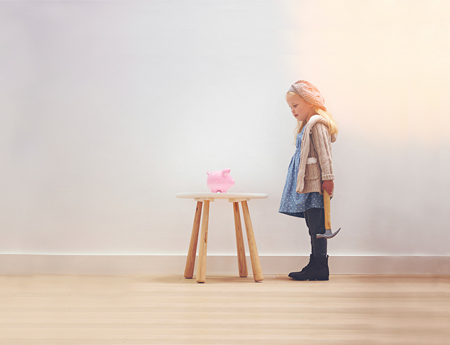