You don’t have to be a millionaire to be an investor. A digital advisor, made by ING, helps people invest for the first time, all by themselves. Two ING experts reveal the psychology behind the tool, which will be live in 10 European countries by the end of this year.

Let’s face it, it doesn’t make much sense to let your money evaporate in a savings account yielding zero interest. It’s probably wise to put some money in stocks or real estate.

But where should you start if you don’t have a clue about investing?

In Spain, you can now ask ‘My Money Coach’ for advice. It’s a six-step digital tool that helps customers figure out how they can reach their life goals, by safely spreading some of their savings over a mix of basic investment funds.

Last year, ING in Belgium, France, Poland and the Czech Republic followed Spain’s example with versions of the digital advisor, under different names (see box out). And if all goes well, 10 European countries will be up and running by the end of the year.

So what did the team learn along the way about the psychology of people and their savings money? What does it take to get customers to invest for the first time in their lives?

We asked Blanca Ballesta Sola, Investment and Savings strategy manager at ING in Spain, and Stijn de Busschere from the team in Amsterdam coordinating the introduction of the digital advisors in the various countries.

Lesson one: Talk about life, not products

Blanca: “A mistake we made in the beginning, is that we started talking about mutual funds far too soon in the tool. This scares people. If they think about stocks and bonds, they think about everything that can go wrong.

“So, now we start by asking questions about life. About their goals, whether they want to save for a new house, a car, their children’s education. Or whether they just want to make more return on their savings money. And we want to know what their life looks like: where they live, what’s their income, etc. Then we calculate their ‘rainy day’ buffer. If that’s all they have, we advise them not to invest at all.

“If you get that straight first, and explain things in very simple language, people are much more willing to listen. My mum should understand this.”

Lesson two: Most are conservative

Blanca: “Of the people who started the analysis in MyMoneyCoach so far (around 90,000), 40 percent completed the process and received a proposal. Around 13 percent opened a product as a result. An amazing conversion rate."

Stijn: “That’s true. And as we are introducing more digital financial advisors across ING, we are reaching ever more clients: over 30,000 clients in Poland, over 30,000 in Belgium and over 20,000 in France. Even though not all of these clients push the button and start investing, this does prove that they are interested!”

Blanca: “Many of our clients are super conservative investors. Around 40 percent of the money goes to a fixed income fund, even though we try to explain it’s better not to put all your eggs in one basket. If your time horizon is 10 years or so, it’s better to go for a fund that’s a bit more risky. But for many, that’s a bridge too far.”

Stijn: “We also found that it helps if you make the decision smaller. Instead of saying: let’s put 10,000 euros in these portfolios, we now say: let’s start with 200 euros a month. It feels much more comfortable.”

Stijn: “We were convinced that people would rather think about their financial situation at home, with the dog lying at their feet. Not in the metro. So we concentrated on the PC and tablet version and ignored mobile.”

Blanca: “It was our biggest mistake. Twice as many people click on our banner when they see it on their mobile. We call it the thumb effect.

“I’m glad we’re making up for lost ground now. In September we're launching a mass campaign in Spain with our mobile MyMoneyCoach tool. Our slogan: ‘You don’t need to be a millionaire to invest, you only need a mobile phone’.”

Stijn: “Most people who’ve done the analysis still don’t act upon it. It’s so easy to get stuck in the status quo. If you’re alright today, why should it be different tomorrow?”

Blanca: “When we ask people, they often say they want to talk things through with a real person. Even if that person is unable to tell them anything different. People just need confirmation. Results of a simple phone call a few days after people have done the analysis are amazing.”

Stijn: “How to add the human touch, that’s our biggest challenge at the moment. Where, when, in what way should we approach clients? Through calls, through chat, in branches? In the end, even though all the numbers tell you you’re doing exactly the right thing, it remains a scary thing to buy that fund.” 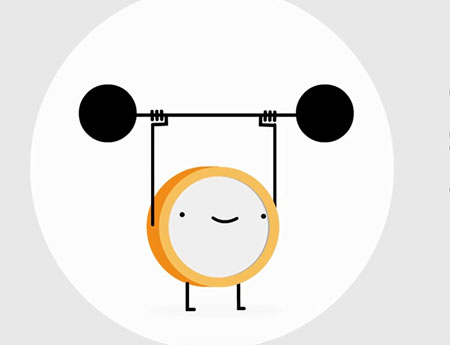 27 July 2016 A financial advisor in your pocket 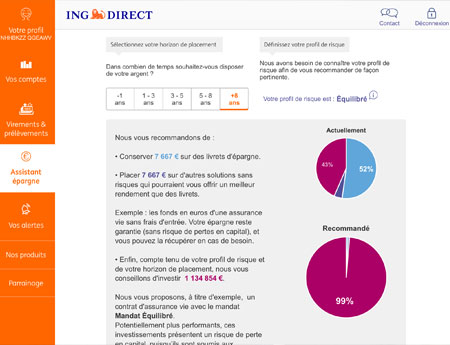